On May 27, 1908, a celebration was organized to mark the 60th anniversary of the Seneca Falls Convention. Most of the festivities took place in the Johnson Opera House, the edifice that stood on the former site of the Wesleyan Chapel. There, a memorial plaque would be dedicated to commemorate the events of 1848.

The prominent children of a number of notable Abolitionists and first-generation Suffragists were on hand to speak on this occasion. Harriot Stanton Blatch profiled her mother (Signer #4); Fannie Garrison Villard, daughter of William Lloyd Garrison, talked about Lucretia Mott (#1); and Eliza Wright Osbourne remembered her mother, Martha Coffin Wright (#8). Prominent African-American Suffragist Mary Church Terrell gave two lectures over the course of the day, one on behalf of women's franchise and the other honoring Frederick Douglass (#73). Also present was a smaller contingent of individuals from Suffrage's founding generation. AWSA leader Antoinette Brown Blackwell, then 83 years old, addressed the assemblage on "The Early Days." Mary H. Hallowell, the step-daughter of Amy Post (#10) and herself Signer #29, was slated to give an oration entitled “Impressions of 1848.” But the absence of her speech from a compilation, later printed by the Seneca Falls Historical Society, leaves it unclear if the 85-year-old Hallowell was actually in attendance.

One lesser-known signer, Mary Conklin Hubbard, then 78, is said to have made an appearance (Brown 85). Signer #32 is, however, not mentioned anywhere in the event program, and her appearance might have come as something of a surprise to event-goers. By 1908, she was one of only five signers known to be still living, the others being Mary Hallowell, Sarah Hallowell (#21), Charlotte Woodward Piece (#37), and Rhoda Palmer (#48). Susan Quinn, Signer #33 and Mary's next-door neighbor, was alive in 1908, but declining health had left her an invalid.

Unmarried by the time of the Convention, Mary Conklin was in jeopardy of being untraceable like her sister, Elizabeth Conklin (#29). Fortunately, their father, William, resided with Mary during the final few decades of his 98-year lifespan. This, incidentally, renders her more easily researched.

As covered in Elizabeth’s profile, Mary, then 23, appears in the 1850 census with her father and four siblings. Of these siblings, I was able to find the grave of her brother John, whose birthplace is listed as Albany. This bit of information strengthens a speculation that Elizabeth and Mary were also born in Albany or Albany County before the family relocated to Seneca Falls in 1843. William Conklin’s birthplace is listed as Columbia County in his obituary, which is geographically adjacent to Albany, strongly suggesting this region as the place of nativity for the Conklin siblings (Jackson & Jackson 110). In the 1860 and 1870 censuses, Mary and William, a gardener, live together at 20 Garden Street. In 1860, William's occupation is now listed as farmer. In 1870, William, now “at home” (essentially meaning “retired”) has an assessed wealth of $1,400; Mary is recorded “keeping house.”

By 1880, Mary has become the spouse of Hiram W. Hubbard, a native of Connecticut. William, now 98, resides with the couple. A woodworker by trade, Hiram is listed in censuses and local directories variously as a turner, a cabinetmaker, and furniture manufacturer. His workshop, where he offers services as a “wood turner” and “scroll sawer” is located at “1 Fall” in the 1874 village directory—wood-turning or scrollwork being the craft of ornamenting pieces of wooden furniture with inlay via a rotating wheel (62).

Hiram Hubbard and his first wife had migrated from Berlin, Connecticut, to Seneca Falls some time prior to 1840, as he appears as head-of-household in that year’s census (Brockway 89). The Hubbard home is illustrated in the 1852 map of Seneca Falls, and it is specifically situated in the 1862 village directory on 23 White Street, a three-minute walk away from Mary’s previous residence on Garden Street (50). In terms of her marriage, the similarities between Mary and her older sister, Elizabeth, are eerie. Like Elizabeth, Mary eloped while in her forties with an older widower who lived in the immediate vicinity of her home.

Hiram’s first wife and eldest daughter were also both named Mary. In the 1850 census, Hiram and Mary Sloan Galpin Hubbard live with daughters Mary E., 8, and Ada, 3. The grave of Hiram's first wife is located in Restvale Cemetery and dates her passing to 1873. A short biography of Hiram's daughter Mary E. Hubbard McKnight reveals that she married in Seneca Falls and thereafter relocated to Springfield, Massachusetts, eventually becoming a mother of five (Brockway 89).

Listing in the 1874 Seneca Directory, p. 127     Sadly, Hiram and Mary Conklin Hubbard would remain married for less than a decade. According to the New York State Death Index, he died on November 29, 1881, aged 66, and is interred in Restvale Cemetery. Earlier that same year, William Conklin died at the home of Mary and Hiram on January 10, age 98 (Jackson & Jackson 110). 1881 must have been a grim year for Mary, and her sense of loss must have only been compounded by Elizabeth's death in 1884. 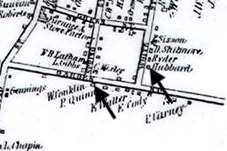 Child’s 1894 directory identifies Mary E. Conklin Hubbard, “widow of Hiram W.” residing at 27 White Street, a residence she owns (308). She lives there with her brother John, “b in 1825 in Albany Co.” who now works as a housepainter (270). An “iron moulder” in the 1870 and 1880 censuses, John has married Amanda, 17 years his junior, and they have a son, Frederick, born in 1860. The 1862 village directory locates John at “65 Mynderse” (40). By 1880, Frederick would follow his father's footsteps by taking on work as an iron moulder. I had no success ascertaining the whereabouts of Mary and Elizabeth’s other known siblings, James and Harriet—but their father’s 1881 obituary attests that he had six living children at the time of his passing. John would live to 84, dying in Willard, Seneca County, in January 1906.  He is buried in Menands, Albany County (“John Conklin”).

Specifying her exact birthdate as December 1829, the 1900 census locates Mary as a boarder in the home of one Talisa Troutman, in the First Ward of the village. After this, the 1905 state census identifies Mary Hubbard, now 75, as an “inmate” of the “Old Ladys Home.” The first signer (so far) to be found residing in a nursing home, Mary’s obituary lists this residence as the Johnson Home for Indigent Females (“Mrs. Mary E. Hubbard”). Located at 57 Cayuga Street, Johnson Home would remain in operation as a retirement facility until 2005 (Shaw, “Seneca Housing”).

According to the New York State Death Index, Mary passed away on June 14, 1909. She is buried next to Hiram in Restvale Cemetery (“Mary Hubbard”). The Seneca County Courier-Jou 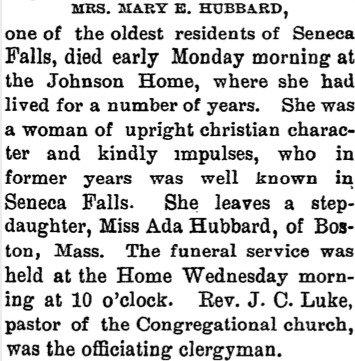 rnal printed her obituary three days after her death, remembering her as “a woman of upright christian character and kindly impulses, who in former years was well known in Seneca Falls.” She is survived by her stepdaughter, Ada, living in Boston. In September, the Courier-Journal notes that her estate at the time of her death amounted to “personal, $550; real, $100” (“Surrogate’s Proceedings”).

Following the 1908 celebration, there seems to be no evidence of a similar memorial event a decade later, in the summer of 1918. The Great War and the pandemic of H1N1 influenza, which began in January 1918, must have hampered any tentative plans for the 70th anniversary of the Convention. And, by then, only Palmer and Pierce remained alive.

The 1908 convocation was the last act of public recognition at Seneca Falls that living signers could have attended. A group photograph taken of event participants may contain Mary Conklin Hubbard's likeness, but, without any caption detailing who's who, her positive identification is a challenge (Brown 227). On a brief hiatus away from the nursing home, Mary Conklin took part in the final celebration of the Convention held during her lifetime. She may have been the last living signer to do so. 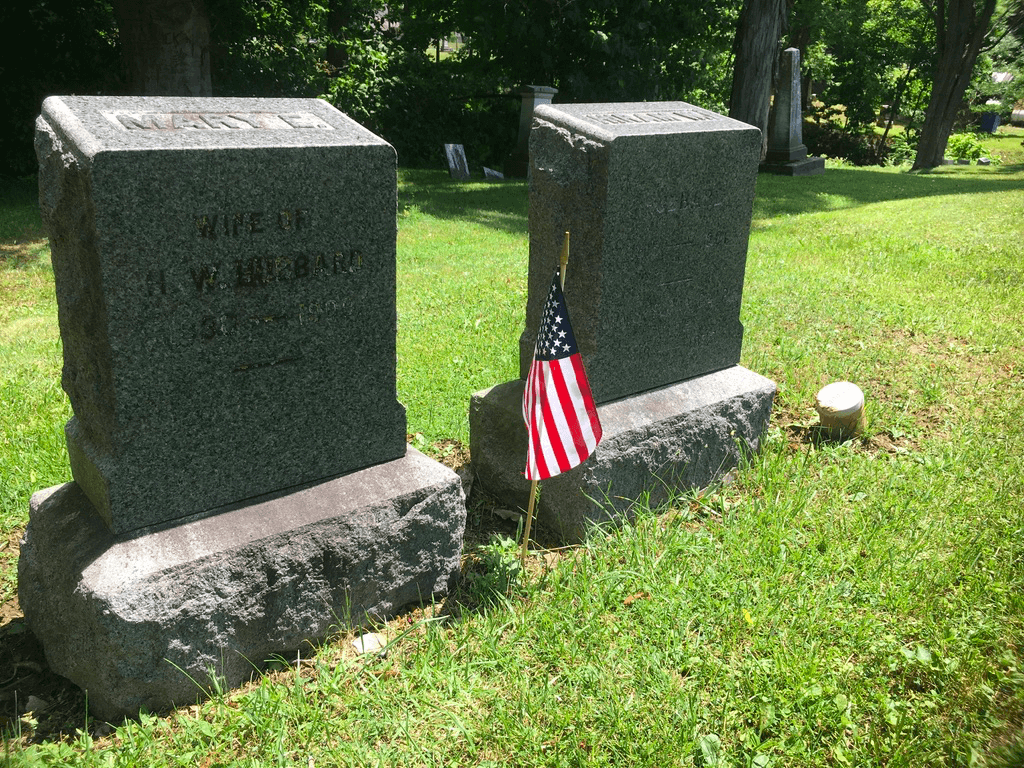 The headstones of Mary and Hiram Hubbard, Restvale Cemetery

“Rhoda Palmer, One of the Five Living Signers of the Declaration of Sentiments. Photomechanical Print.” Library of Congress, https://www.loc.gov/resource/rbcmil.scrp4006803/. Accessed 10 June 2020.