In a profile of Phebe King on the Women's Rights National Historic Park website, Judith Wellman remarks that a search for Signer #35 “illustrates the difficulty of identifying women in history, when much of the historical record focuses on men.”  Barriers that excluded women from the privileges of full citizenship (such as franchise, property ownership, and equal participation in the arenas of law and commerce) also contribute to their marginalization in the archive.  Bureaucratic records documenting women’s lives from this period are often far scarcer than those available for adult males.  Being poor or itinerant compounds this marginalizing effect.

The traces of Phebe King’s life story represent a case study in this phenomenon of lessened archival visibility for the disenfranchised.  Without a reliable sample of contemporary records to construct a chronology, pressure then shifts toward examining the handful of artifacts that do exist.  One record in particular—regarding the inhabitants of a Waterloo household in the 1850 census—must serve as a lodestar for charting the movements and details of an entire life.

Strangely enough, there is absolutely no variation in the spelling of Signer #35’s name in texts that reproduce the Declaration of Sentiments (such as John Dick's 1848 report on the convention, the first volume of The History of Woman Suffrage, The NAWSA Handbook, and “Our Roll of Honor”).  This includes zero spelling variation surrounding the  “o” often used in the name “Phoebe.”

Based off a cursory search, there are several individuals named “Phebe King” living in the Finger Lakes Region in the 1850 census.  One Phebe King lives in Ithaca, which is approximately 40 miles away from the Wesleyan Chapel; one in Ulysses (32 miles); Newfield (46 miles); Locke (37 miles); Lansing (45 miles); and Catharine (45 miles).  In Lyons, which is about 18 miles distant from Seneca Falls, a Phebe King lives with six children, including a one-year-old, Esther, born in 1847.  A seventh child, Rosetta, would be born in 1848 or 1849.  In my thinking, these are all formidable distances to travel on less than one week's notice in July 1848, especially in the case of someone caring for a newborn while possibly expecting another.

In a record first uncovered by Judith Wellman, there is yet another Phebe King tabulated in the 1850 census for Waterloo.  In household visitation #1067, this Phebe King is listed as being 56 years of age, so born around 1794, and is identified as being a native of Connecticut.  She lives with Hannah Carter, 35, a New York native.  In the same residence, Eliza and Florence Lawton, New York natives, are 29 and 6 years of age, respectively.  And there is additionally one Julia Drake, 36, also from New York.  This last name is revealing because of the arrangement of names in the signatories section of the Declaration.  The signature immediately after Phebe King’s in the Declaration of Sentiments is one “Julia Ann Drake,” Signer #36. 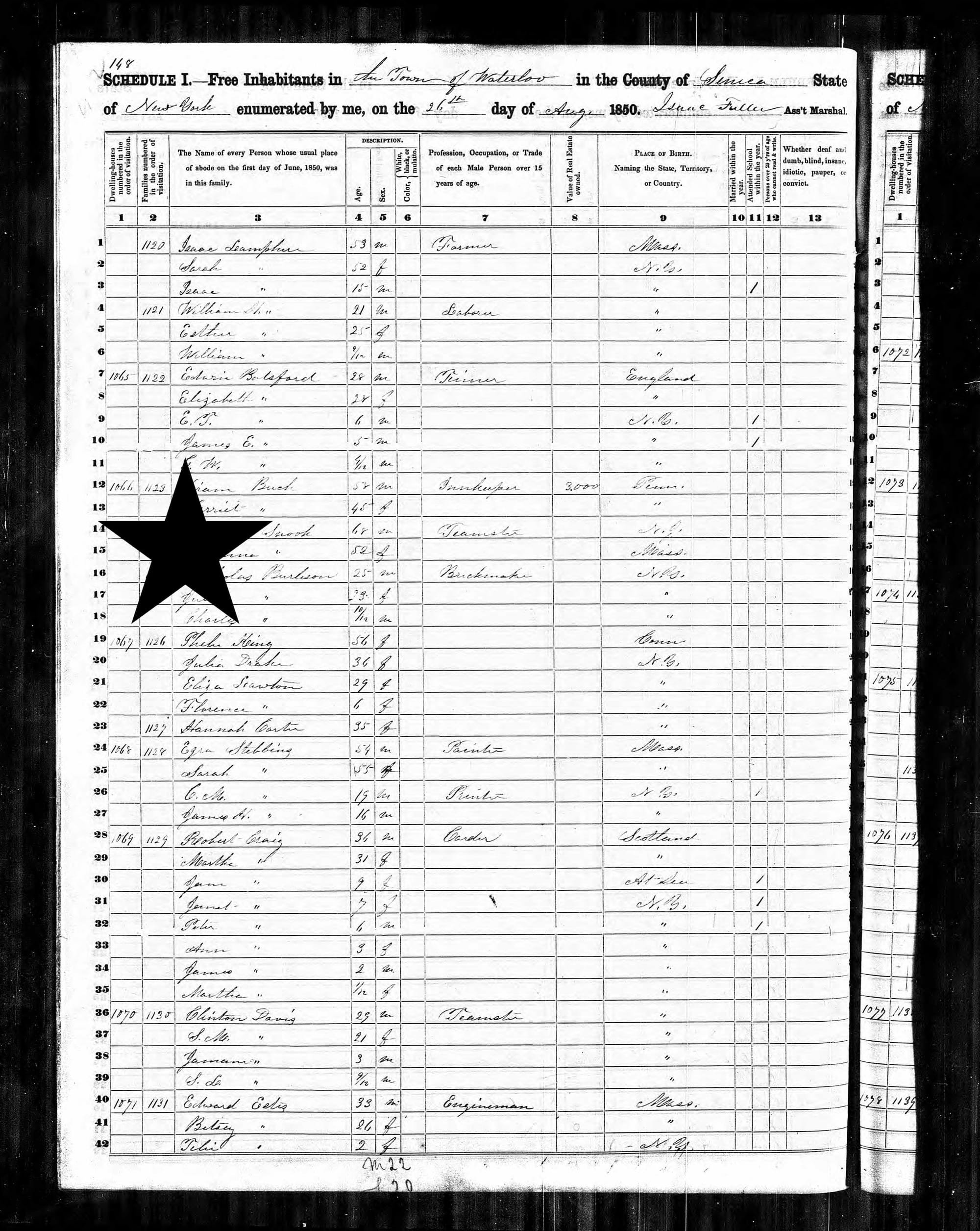 That a Julia Drake lives in the same household as a Phebe King makes it exceedingly likely that this Phebe King is Signer #35 and this Julia Drake is Signer #36.  It is hard to imagine a scenario in which two women named Phebe King and Julia Ann Drake happened to sign the Declaration consecutively, while a separate pair of individuals with identical names lived together under the same roof in nearby Waterloo.  This is simply beyond the realm of probability.  Moreover, King and Drake are immediately followed by Signer #37, Charlotte Woodward, who was born in Waterloo.  I would argue that their ordinal clustering together with Woodward in the Declaration reinforces the notion that King and Drake are Waterloo locals.  Phebe King and Julia Ann Drake are also immediately preceded in the Declaration by Mary S. Mirror, Signer #34, helping to strengthen my contention that Mirror/Minor was herself a local.

An important peripheral detail about this page of the 1850 census for Waterloo is that the census-taker identified at the top of the ledger is Isaac Fuller, who may very well be the same Isaac Fuller who founded the Seneca County Courier in 1836. Coincidentally, the 1876 History of Seneca Co., New York notes that Fuller was on a brief hiatus from the Courier during 1849-1850, before re-purchasing the newspaper and returning as its editor in 1851 (54-55).  If Fuller was new to census-taking, as a temporary sideline during this sabbatical away from journalism, that would explain the crucial details omitted regarding Household #1067.  No occupational information is given for the adult residents, which was a fairly reliable feature of the 1850 census.  Explicit familial relations among #1067's inhabitants are also left out of the catalog.

Fuller nevertheless identifies, via annotation, two separate familial groups living in #1067, in keeping with census protocol.  Family #1126 incorporates Phebe King, Julia Drake, and the Lawtons.  Co-resident Hannah Carter is, however, marked singularly as belonging to family #1127.  This suggests that Phebe King could be the mother, mother-in-law, aunt, or sister of Julia King and Eliza Lawton.  And, in fact, additional archival records, examined below, bear out the fact that Phebe King was Julia and Eliza's mother, in spite of their different surnames.

Even though the census does not record street addresses, I tried to generate a rough location of Household #1067 by looking up the addresses of other families on the same and adjoining pages of the census.  To this point, in the 1862 Brigham’s Geneva, Seneca Falls, and Waterloo Directory, I found the households of Clinton Davis, teamster, and Lorenzo Davis, brickmaker, both situated on the 300 block of Main Street in Waterloo, giving a rough possible location for #1067 (23). [Waterloo’s Main Street has since been reorganized into East Main and West Main, altering street numbers.]

Ten years prior, in the 1840 census, a Phebe King is listed as a householder in Seneca Falls.  Female heads-of-household in the 1840 census are exceedingly rare.  On a page listing 30 families, King, for example, is the only woman named.  In this home, King lives with nine others: four males, in the age range of 15 to 40, and five females, four of whom are between 20 and 30 years old.  One assumption to draw from from this age distribution is that Phebe King was widowed prior to 1840, but still lived with a number of adult children by 1840 and, possibly, with those children’s newlywed spouses.

After 1850, the members of Household #1067 vanish from local record.  A preponderance of evidence suggests that Phebe King trekked west and lived out her life in Iowa, more than 750 miles away.  In the 1870 census, one Phebe King, now 77 with her birthplace identified as Connecticut, resides in Clinton, Clinton County, Iowa, in the household of Eliza and Philip Drake.  Phebe’s occupation is listed as “lives with son.”  Eliza is 46, and Philip, a wagon maker, is 47 years of age.  Both are natives of New York.  Eliza and Philip had lived for a time in Van Buren and then Elbridge, Onondaga County, New York, departing some time after the 1855 New York State census.  In the 1855 Elbridge census, Philip is identified as “P. Drake 2,” imparting the idea that his father was also Philip.  The presence of the surname Drake in both the Waterloo and Clinton households also links this Phebe King to the Phebe King living in Seneca County in 1850.

In 1860, Eliza and Philip Drake live in Clinton with two teenagers, Gertrude and David, as well as Florence and Hubert King, 8 and 6--without Phebe King.  In the 1860 census, a Phebe King, “Widow,” 68 and from New York, surfaces in the household of Alfred and Adelia Negus in Cambridge, Henry County, Illinois, which is situated about 50 miles due south of Clinton.  If these traces present an accurate track of Phebe King’s westward sojourn, its similarities to the route taken by the family of Signer #83, Robert Smalldridge, from Seneca Falls to Illinois to Iowa, is remarkably similar.

According to the 1879 History of Clinton County, Iowa and federal draft records, Philip Drake served briefly in the Iowa 2nd Infantry as a wagoner during the Civil War (460).  By 1880, Philip, now 58, labors as a blacksmith.  In July 1877, he re-married, to Addie Cochran Drake, 34 years of age by 1880 (Iowa Select Marriages Index).  A two-month-old, Philip III, has joined the family in 1880's census. Phebe is listed as being 88 and a native of New York.  Her occupation is set down as “at Home.”

Following this census, Phebe King disappears from record.  According to findagrave.com, two Philip Drakes, who both passed away during the 1880s, are interred in Springdale Cemetery in Clinton.  A receipt for a memorial headstone, procured for deceased Civil War veterans, confirms that Philip Drake II died January 31, 1886.  The other Philip Drake, possibly the Drakes' infant son, died in 1881.

While researching for this profile, I could find very little regarding the lives of Household #1067’s other residents: Hannah Carter, Eliza Lawton, and Julia Ann Drake (who will b 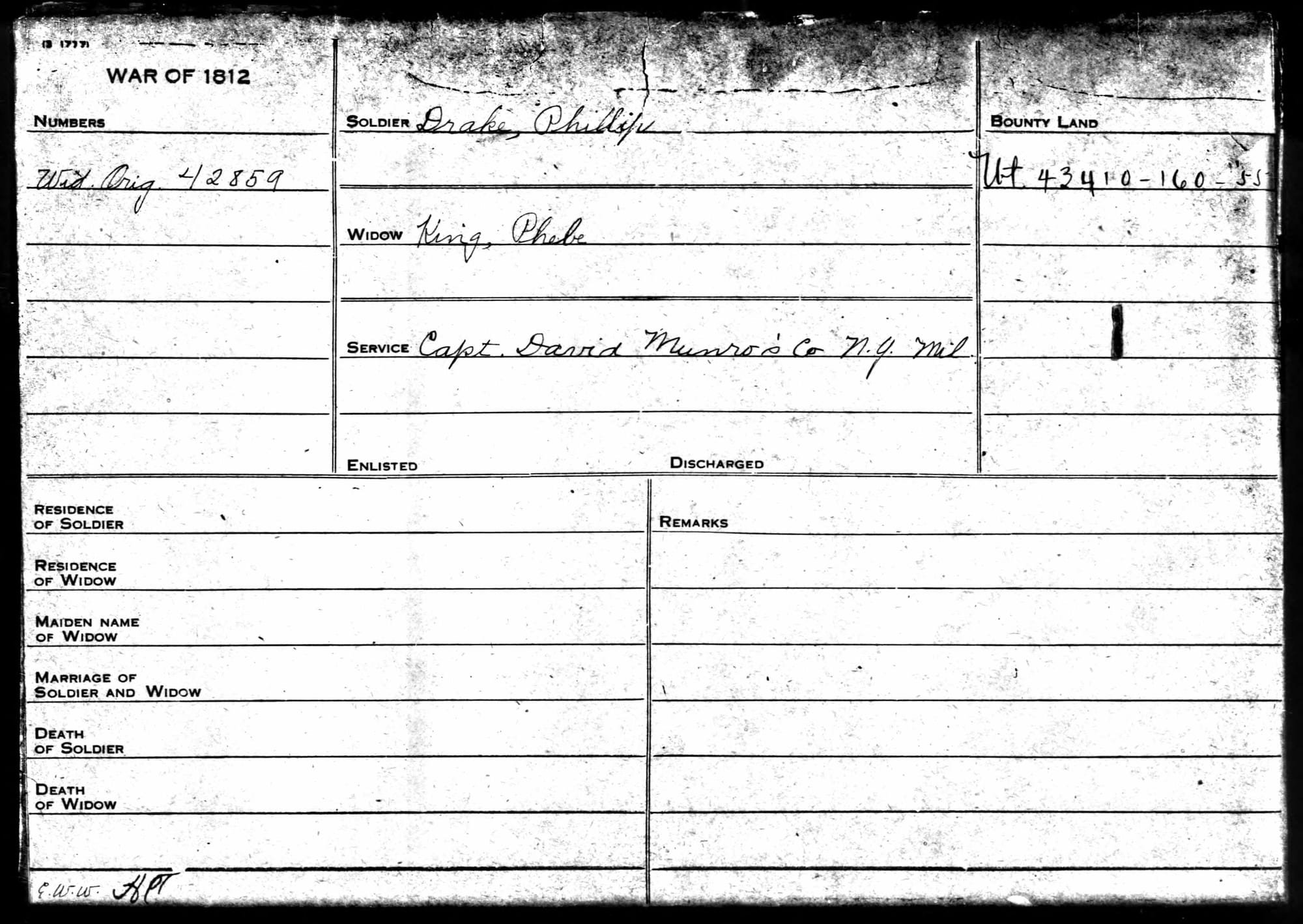 e profiled as Signer #36).  I did find evidence that Florence Lawton, as an adult, married one Augustus Hamilton and eventually settled in Portage, Indiana, by the time of the 1900 census.  In a 1954 membership application to the Sons of the American Revolution, made by descendant Robert Arthur Bacon, the applicant attests that Florence was born September 14, 1844, and married on November 7, 1865.  It also notes that Florence and Augustus died within two months of each other during the winter of 1920.  In a 1946 directory published in the “News-letter” of the National Society United States Daughters of the War of 1812, Mabelle Victorene Hamilton, Florence’s daughter then living in Indiana, claims descent from 1812 veteran Philip Drake (34).  Philip Drake I served as a private in Captain David Monroe’s command in the 159th New York Regiment during the conflict.  Searches for this Philip Drake lead me to a pension application for the widow of a War of 1812 veteran.  The applicant, Phebe King, is the surviving spouse of “Phillip Drake,” who served in “Capt. David Munro’s Co. N.Y. Mil.”  No dates or other useful vital statistics are given in the application, and it is unclear whether or not this record is an original or a subsequent reproduction.  King’s identification number in the document is “Wid. Orig 42859,” and “bounty land” from Drake’s service in the conflict is located in Vermont (“Vt. 43410-160-55”).  These connections help to establish that Phebe King was the mother of Eliza Lawton and was very likely the mother of Julia Drake as well.  The approximate birth years of Eliza Lawton and Philip Drake II places the death of their father after 1821.  I could find no record of Phebe Drake's assumption of the surname King through a second marriage, but this is the most likely the cause.  What is clear is that Phebe King managed to support and sustain a family for a very long time after being widowed.

It is telling that both 20th-century descendants sought to have their male ancestors’ military service recognized, while their family connections to the Seneca Falls Convention and the Declaration of Sentiments, at some point, fell to the wayside and were forgotten or neglected.

The History of Clinton County, Iowa: Containing a History of the County, Its Cities, Towns, Biographical Sketches of Citizens, War Record of Its Volunteers in the Late Rebellion. Brookhaven Press, 1879.

“Our Roll of Honor. Listing Women and Men Who Signed the Declaration of Sentiments at First Woman’s Rights Convention, July 19-20, 1848.” Library of Congress, Washington.