Last year, I received an email from a genealogical researcher who had come across this blog.  She asked if she was related to Malvina Beebe Seymour, Signer #17.  Hopefully, this profile will assist the reader's ongoing research into her family history.

According to the birthplace information included in the 1875 New York State census, the 1900 federal census, and burial information located on findagrave.com, Malvina Beebe Seymour was born in Canandaigua, Ontario County, New York, on May 24, 1818.  Donald Lines Jacobus' 1939 History of the Seymour Family identifies her as the daughter of Leicester P. and Redema Williams Beebe (311).

Like Sophronia Taylor (Signer #24), Malvina Seymour’s given name originates from a work of epic poetry popular during her lifetime.  "Malvina" means “smooth brow” or “smooth forehead” in Gaelic and is first used in the opus of the ancient (possibly fabricated) Scottish bard Ossian.  Ossian’s works were, allegedly, first translated into English and published in the 1760s by James Macpherson, a Scot.  “Malvina the daughter of Toscar” is a protagonist and doomed love interest in the Ossian epic poem, Fingal (83). Since its initial publication, debate has abounded over the authenticity and antiquity of Ossian poetry, especially regarding whether Macpherson largely manufactured the Ossian oeuvre, whether he reconstructed it from fragments of Scottish oral tradition, plagiarized it from Irish sources, or is guilty of some combination of these acts (“Ossian Controversy”).

Ossian surfaced at a time when artifacts of a literary past were entered into evidence as part of colonized peoples’ claims for self-determination, independence, and nationhood—operating in the case of Ossian, on behalf of the Scots.  Definitely in the camp of Ossian true-believers, a 1907 issue of The Celtic Monthly notes that the name Malvina has been, only recently, “restored to use by the publication of Ossian” (200).  Macpherson’s (re)construction of Scotland’s epic literary canon, in many ways, parallels the recovery of a literary tradition and ancient chronicle by Joseph Smith in the 1820s, on Hill Cumorah, a site just over 25 miles away from the Wesleyan Chapel.

There is zero variation in the spelling of the name “Malvina Seymour” in reproductions of the Declaration (the 1848 John Dick report, 1893's NAWSA Handbook,  1908’s “Our Roll of Honor,” or the roster published in The Seneca County Courier-Journal in July 1923).  Malvina Seymour’s name is so uniformly recorded because, I would argue, the Seymour family was well known in Seneca Falls, even though they would leave the village in the mid-1860s.

Malvina and Henry were married in Seneca Falls on March 21, 1838, some time after Henry's arrival in the village in 1836 (Jacobus 311).  In an 1850 census record created by Isaac Fuller, Malvina, listed here as 30, lives with her spouse, Henry William Seymour (Signer #74), 35 and a native of Connecticut.  Henry’s occupation is given as pump manufacturer.  They live with a son, William H., 11, born January 22, 1839, and a 62-year-old female born in Connecticut, Sarah Hurlbut Seymour, identified in subsequent censuses as Henry’s mother.  Of the nine households recorded by Fuller on this page from the 1850 census, five are headed by individuals with their profession listed as “pump maker” or “pump manufacturer,” a reminder of the degree to which the canal trade drove the local economy.

In the signatory section of the Declaration, it should be acknowledged that there are two almost identical names: the John Dick report includes one “Henry W. Seymour” (Signer #74) and another “Henry Seymour” (#75).  These two Henry Seymours lived within a stone’s throw of each other; both men were pump-makers, and they were distantly related.  A short history of the pumpmaking industry in Seneca Falls, produced in Hamilton Child’s 1867 Gazetteer and Business Directory for Seneca County, in fact, distinguishes the two Henry Seymours in the same manner as the Declaration: Malvina’s spouse is “Henry W. Seymour,” and his namesake is simply “Henry Seymour” (49).  The common confusion of names, which must have dogged these two individuals around town, might have been a contributing factor in the Seymour family’s eventual departure from Seneca Falls.  And I was hard pressed to find any document, anywhere, in which Malvina’s spouse is named without his middle initial, as “Henry W. Seymour.”

While her spouse was occupied in the pump-making industry, Malvina embarked upon her own business venture in the second half in the 1840s: bonnet-making.  A history of hat-making in the village presented by Janet McKay Cowing (possibly a descendent of Henry's business partner, John Cowing), given before the Seneca Falls Historical Society, excerpts an advertisement from The Free Soil Union in 1846: "'Mrs. Malvina Seymour (Mrs. Henry W.) will open the latest Paris and London fashions at her bonnet rooms, a few doors above the postoffice, on Tuesday, October 17th, velvets, silks, and satins, bridal ornaments, head dresses, etc.  Mrs. Seymour very respectfully solicits the ladies to call and examine goods and prices"' (54).  The placement of the ad in The Free Soil Union hints at the Seymours' abolitionist disposition.  Millinery, like other forms of labor related to textiles, appears to have given the women of Seneca Falls their first entry point into the world of business and economic self-reliance in the 1840s.

By 1860, the family has added another son, Frederick Herbert, born on December 6, 1857.  The Seymours have also taken in a servant from Ireland named Rosa.  The 1862 Brigham’s Geneva, Seneca Falls, and Waterloo Directory lists the home address of “Seymour, H.W.” as “6 N Park,” about a half-mile northeast  of the Wesleyan Chapel (65).

Son William H. Seymour is absent from the 1860 census, and this is probably best explained by his upcoming military service.  Like signers Mary L. Minor (Signer #34), Betsey Tewksbury (#47), Cynthia Fuller (#50), and Robert Smalldridge (#83), Malvina and Henry W. Seymour were the parents of a future Civil War veteran.  According to both The Report of the Adjutant General and The Civil War Muster Roll Abstracts, William was commissioned as a sergeant major in the 75th New York Infantry Regiment, also known as the Second Cayuga, in October 1861.  The unit was fully mobilized in Auburn the following November (“75th Regiment”).

The December 3, 1861, edition of The New York Times lists William among the officer corps of the 75th.  The article notes the regiment’s presence on Governor’s Island, in New York Harbor, about to sail for the South on the steamship Baltic (“Twelfth Maine”).

The 75th Regiment would have engagements in Florida and Louisiana during the winter, spring, and summer of 1872, including involvement in the Union occupation of Pensacola.  Over the course of the war, the 75th accrued 95 deaths among officers and enlisted men as a result of combat; 103 deaths came as a result of disease (“75th Regiment”).  According to the Muster Roll Abstracts, William was discharged by September 1862 at New Orleans “for disability,” although I could not locate more information about the nature of this injury.

William survived the war and rejoined his family by the time of the 1865 state census.  Sometime after 1862, however, the Seymours left Seneca Falls and settled in Lockport, Niagara County, more than 100 miles west.  William, 25, works as a bookkeeper.  Henry, 49, is a manufacturer, Sarah is 78, and Frederick is 7.  Malvina is 47, and the family now includes a two-and-a half-year-old boy, Walstein (elsewhere, Walstine or Walter), born in Seneca County.

An 1866 Lockport directory locates the Seymour family home at “56 Pine” in Lockport, one block away from the Erie Canal (114).

By the 1875 Lockport census, Sarah no longer appears, and William has evidently left his parents’ household.  Like signers Robert Smalldridge and Phebe King (Signer #35), William subsequently resurfaces in Iowa, more than 700 miles away.  The 1880 census for Des Moines includes William, employed as a hardware merchant.  He is married to one Mattie (elsewhere Martha) Coffin, a native of Iowa, and they have a son, Edward, 6, born in Kansas.  In the same household, Sarah and Ida Coffin reside, identified as sisters-in-law of the householder.  [Based on birthplace information given in subsequent censuses, I could find no evidence linking Mattie Coffin Seymour to Martha Coffin Wright (Signer #8) or Lucretia Coffin Mott (Signer #1).]

By 1885, Walstein has joined the household of William, Martha, and Edward in Des Moines.  Subsequent Des Moines city directories reveal that Walstein supported himself as a bookkeeper (Bushnell 439). According to the Iowa Marriage Index, Walstein married Alice Crandale in 1889—Alice’s father, George, is the party responsible for granting consent in the document.  Walstein’s parents are identified in the lower righthand corner:

Walstein died on January 28, 1892, and lies in rest at Woodland Cemetery in Des Moines (“Walstine Seymour”).  Alice, now widowed, would reside in Des Moines with her mother, Pamelia, and make a living as a “china decorator” in the 1910 and 1920 censuses.

1895 would be a tragic year that saw the death of another of Malvina's children and her husband.  According to his headstone, William H. Seymour died on October 27, 1895.  He is interred at Glenwood Cemetery in Lockport (“William Seymour”).  Martha and Edward surface in the 1900 census, living in Chicago.  By the time of the 1930 census, Martha and Edward still share the same Chicago residence, where Edward works as a traffic manager at a steel mill.

By the 1892 state census for Lockport, Henry W. Seymour has retired.  He is now 78 and Malvina is 74.  Dying a few months prior to William, Henry passed away on April 3, 1895, aged 80.  An anchor adorns the headstones of both William and Henry in Glenwood Cemetery, possibly denoting William’s maritime experiences in the Civil War and his father’s career in pump manufacturing (“Henry W. Seymour”).

The only one of her children to survive Malvina, Frederick's professions are listed as farmer, draughtsman, and mechanical engineer in the 1900, 1905, 1910, and 1920 censuses.  He married Catherine Chase, and they would adopt two daughters, Florence and Catherine. Florence married one Walter Kline some time prior to the 1905 census.

Frederick passed away on November 8, 1921, after “a long illness.”  His newspaper obituary, incorporated on findagrave.com, recognizes him as a “prominent Lockportian,” who had labored for many years as a draftsman at Holly Manufacturing.  It also reports that Catherine had married a Sidney Russel Northwood of Wagon Mound, New Mexico (“Frederick Seymour”).

A notarized 1884 passport application for Frederick, made when he was 26, lists him as being almost 5’8” and having blue eyes, a “regular” nose, a “low regular” forehead, dark brown hair, and a “medium size, regular” mouth with “side whiskers and dark moustache.”

By the 1900 census, Malvina lives with a boarder, Frances Paine, and a servant, Estelle.  The 1902 Lockport city directory lists Malvina, “widow of Henry W.,” residing at 186 Pine Street, one block down the same street that the family had relocated to four decades earlier (215).  According to the 1903 New York State Death Index, Malvina passed away on January 11 of that year.  A contemporary obituary of Malvina, excerpted on findagrave.com, remarks, “Malvina Beebe Seymour, widow of the late Henry W. Seymour, died at her late residence, No. 186 Pine street…aged 85 years. She leaves to mourn her loss one son, Fred H. Seymour, of this city.”

Malvina Seymour's passing did not go unobserved in Seneca Falls, suggesting that the social ties she had built there decades before remained intact for the rest of her life.  On January 15, 1903, The Seneca County Courier-Journal reports, "Word was received here the first of the week of the death of Mrs. Melvina Seymour, widow of the late, Henry W. Seymour who was formerly a resident of Seneca Falls and associated with the late John P. Cowing in the manufacture of pumps.  Mrs Seymour had many acquaintances among the older residents of Seneca Falls." 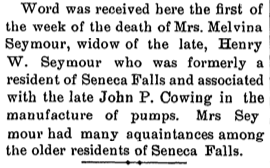 “Our Roll of Honor. Listing Women and Men Who Signed the Declaration of Sentiments at First Woman’s Rights Convention, July 19-20, 1848.” Library of Congress, Washington.

“Walstein Seymour-Alice Crandale Marriage.” Return of Marriages in the County of Polk, Iowa, Iowa Board of Health, 1889.