I recounted many details in the life of Signer #74, Henry William Seymour, through my profile of his spouse, Malvina Beebe Seymour (#17).  A little more about #74 was also revealed through the profile of his namesake, distant cousin, and Signer #75, Henry Seymour.  This gave me the chance to look for additional traces of Henry W. Seymour’s early life.

I also had the opportunity to delve more deeply into the mystery surrounding the two Henry Seymours in the Declaration of Sentiments.  Namely, why are their names so proximate in the Men's Section when they had recently exchanged a business associate, John P. Cowing?  Cowing had parted ways with Signer #75 in 1847 and, within the span of a year or less, partnered with Signer #74.  How this could have taken place, absent the exchange of serious resentments among the parties involved, remains a challenging question.  In researching Signer #74, I  also found that, during the quarter of a century that he lived in Seneca Falls, Henry W. Seymour enjoyed little of the business success that his cousin did.

According to Donald Jacobus’ History of the Seymour Family, Henry W. Seymour was born to Chester and Sarah Hurlbut Seymour of West Hartford, Connecticut, in August 1814 (311).  I even found a brief archival record of Henry’s baptism (a first for this research blog), which occurred on October 12 of that year (Church Record Abstracts 889).

On October 15, 1817, Sarah and Chester welcomed a daughter, Elizabeth (Hurlbut 444).  At some point after Elizabeth’s birth, the family migrated from Connecticut to Brownhelm, Ohio, accompanied by Chester’s mother, Abigail Skinner Seymour.  Located on the southern shore of Lake Erie, Brownhelm is between 580 and 630 miles distant from West Hartford.  Just east of Brownhelm, the village of Cleaveland had only been incorporated as recently as December 1814.

Sadly, the Seymours would weather tragedy in Ohio.  In Brownhelm Cemetery, the headstone of Abigail Seymour marks her death as occurring on May 28, 1819, age 68.  Daughter Elizabeth’s epitaph records her death the following month, on June 19, 1819, at just 20 months old.  Lying in rest between his mother and infant daughter, Chester passed away on October 10, 1821, age 33.  Henry would have been seven years old at the time of his father’s death (“Seymour Family Plot”).

Sarah Hurlbut Seymour lived with her son for the rest of her life; there is no evidence that she ever remarried.  The psychological and material hardships that Sarah and Henry must have faced on the Ohio frontier, after losing so many members of their immediate family, is unimaginable.  Sarah Hurlbut Seymour represents yet another example of how single-parent households, led by widowed women, recur in the life stories of the Declaration signers.  Sarah would live to be 78, dying in the Lockport home of Malvina and Henry on February 18, 1866 (Hurlbut 444).

Disappearing from record after 1821, Henry and Sarah resurface in Seneca Falls in 1836, which represents yet another migration of at least 330 miles (Jacobus 311).  The history of Seneca Falls that first appears in Delancey Brigham’s 1862 county directory recalls that Henry’s initial career in the village was as a firefighter.  He was appointed to Engine Company #2 in the summer of 1837 (19).  The next year, Malvina and Henry wed in Seneca Falls on March 21, 1838 (Jacobus 311).

Henry’s work experience as a firefighter must have prepared him for the pump-making business—but only to a degree.  While the exact nature of his early entrepreneurial ventures in the Finger Lakes Region is unclear, he was compelled to declare bankruptcy by the spring of 1842.  In mid-March, both The Auburn Journal and Advertiser and The Geneva Courier name Henry as a petitioner for the discharge of his debt burden (“Bankrupt Act,” “In Bankruptcy”).  Henry is suing for bankruptcy relief as both an individual and as a partner of the now-defunct Curtis, Robinson & Seymour:

By May, The Courier schedules the settlement of Henry’s debts, the “Petition for Discharge and Certificate,” for July 23 (“In Bankruptcy”).  I could find no concrete indicator of what business the short-lived entity of Curtis, Robinson & Seymour actually engaged in.  I did, however, find additional records revealing that the firm’s downfall also drove one of Henry’s partners to declare bankruptcy the same year.  In August, The Auburn Journal and Advertiser announces that creditors must “show cause against the petition of John Curtis, of Auburn…individually and as one of the late firm of Curtis Robinson and Seymour,” by appearing in court on November 8 (“In Bankruptcy—Second Notice”).  A “machinist” by trade, Curtis would recover financially: his worth in the 1870 census is listed as $50,000 of real estate and $40,000 of personal estate (“John Curtis”).

What Henry W. Seymour did to make ends meet after this turn of bad luck is unknown.  His insolvency does help to explain the hat-making venture that was initiated by his spouse in 1846.  Malvina’s millinery was, perhaps, intended to support the family income in a very critical way.  This would have been especially true given the challenges that Henry would have faced if he had attempted to secure credit or start a business after his bankruptcy.

As recounted in the profile of Signer #75, Henry Seymour and John Cowing had joined up in a pump-making interest, Cowing & Company, in 1840.  In 1847, they ended the partnership—although Signer #75 would continue on independently in the same industry until 1854.

Into this vacuum, John Cowing and Henry W. Seymour (Signer #74) became partners in 1847.  Brigham catalogues all the different hydraulic devices and metalware that Cowing & Company was churning out by 1862: “Fire Engines, various kinds and sizes of pumps, garden engines, railroad pumps, hydraulic rams, thimble skein and pipe boxes, and a great variety of other iron and brass goods” (28).  In 1864, James L. Bishop's A History of American Manufactures attest that Cowing & Co. produced, "250 varieties of Polished Cylinder Lift and Force Pumps, besides Hydraulic Rams, Garden and Green House Engines, Sadirons, etc." (646-7).

Cowing’s newly formed alliance with Signer #74 could not have gone unnoticed by Signer #75 after their falling out.  Given these rapidly shifting and somewhat suspect business arrangements, it is hard to imagine that these three men would have been on good terms by the time of the Seneca Falls Convention in 1848.  The question persists: why do the signatures of the two Henry Seymours exist consecutively in the Declaration, just months after the partner swap occurred?  Is it a sign of ongoing competitive rivalry, of one-upmanship, friendship, forgiveness, or fraternity?  Was the relationship between the two Henry Seymours strained or simpatico?  The personal dynamic underlying the two virtually identical names that follow Signer #73, Frederick Douglass, is a head scratcher.

The partnership between Cowing and Henry W. Seymour was itself partly driven by proximity.  In an 1850 census record taken by Isaac Fuller, Cowing’s and Seymour’s families are recorded two household visitations apart, suggesting that they were next-door neighbors (“John P. Cowing”).  The resulting business venture between Cowing and Seymour would prove to be supremely ill-fated and was met, almost instantly, with a litany of disastrous setbacks and force majeure.  Brigham records that “in April, 1849, their Furnace was consumed by fire, immediately rebuilt, and again burned in December of the same year” (27).  The addition of a third partner, John A. Rumsey, did not change the firm's fortunes:

“In January, 1851, their Furnace was again destroyed by fire, and the Old Cultivator Ship was also burned at this time; they were speedily rebuilt, and manufacturing proceeded with.  In the great fire of 1853, which destroyed nearly all the most valuable buildings on Mill street, the Clock Factory building, and front and rear Furnace belonging to Cowing & Co. were consumed, with a large amount of valuable machinery.  The Company then commenced the erection of new buildings, in which they have since conducted a very large and successful business.  In the same year of the last fire, a most terrific hurricane, or tornado, swept over the village, unroofing buildings, blowing down chimneys and trees, and destroying a large amount of property.  It carried a good portion of the roof of Wm. Arnett’s Mill across the river, and deposited it on the upper building of Cowing & Co., doing serious damage.” (27) 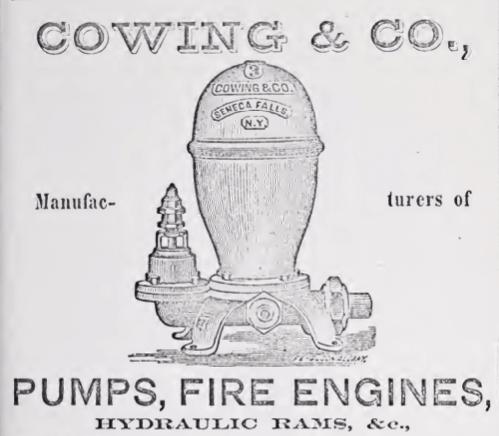 Child's 1867 Directory, 122.wing immediately brought in his sons, Philo and George, to aid in running the business (Welch 59).  By the 1860 census, Cowing and Seymour are no longer neighbors.  In 1862, the Seymour family lives at 6 North Park and the Cowings reside at 24 East Bayard (Brigham 65, 41).  Cowing & Company thrived in the 1860s.  By 1867, Hamilton Child reports that the business consisted of 9 buildings and maintained between 60 and 100 employees.  Per annum, it consumed 1000 tons of pig iron, 60 tons of coal, and 150 tons of sand  (49-50).  “No other firm in the village has had to contend with so many misfortunes as have fallen to the lot of Cowing & Co.,” Child writes, “but they have triumphed over all reverses, and are now enjoying a large and profitable business” (50).  One is left to wonder about Henry William Seymour’s financial position at the time of his retirement from Cowing & Co.  Did he enjoy the same economic windfall that his partner eventually did?  In his 1864 profile of Cowing & Co. and other notable Seneca Falls industries, James Bishop makes no mention of either Henry Seymour, which suggests that they were, perhaps, not fondly remembered by the Cowings (646).

Donald Jacobus places the departure of Malvina and Henry from Seneca Falls during 1864, bound for Lockport, Niagara County, where they would live out their lives (311).  Like Seneca Falls, Lockport was then a key hub for the hydraulics industry, "by reason of the vast water-power created by the flow of water from Lake Erie as it passes around the locks and descends from the Erie to the Genesee level" (Bishop 647).

I cannot help but notice the eerie parallels between the deaths of Henry’s immediate family, after they immigrated to Ohio around 1817, and the deaths of Henry and Malvina’s sons William and Walstein, after they immigrated to Iowa around 1870.  Both generations moved hundreds of miles west before dying on the frontier of unknown causes.  William Henry Seymour, who passed away in Iowa in October 1895, outlived his father by only a few months.  Henry W. Seymour was, however, still alive in 1892 to receive news of the death of his son Walstein in far-off Des Moines.  Walstein was also remembered and grieved in Seneca Falls: 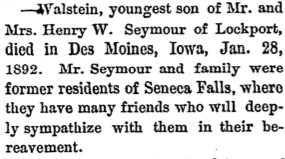 Seneca County Journal, February 3, 1892.        The deaths of his father, grandmother, and infant sister, shortly after their immigration to Ohio, must have been a major feature of Henry William Seymour’s early life.  The resilience of Henry’s mother, Sarah, who managed to keep her son and herself alive under those trying circumstances, must have been as well.

Hurlbut, Henry. The Hurlbut Genealogy, or Record of the Descendants of Thomas Hurlbut. Munsell, 1888.