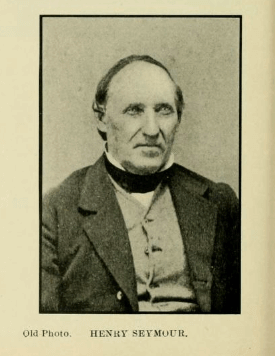 Signer #75 is an oddity among the profiles completed thus far.  A well-established elite, Henry Seymour is exactly the type of person one would expect to not be present in the signers' section of the Declaration of Sentiments—a quality which makes him all the more interesting.  He was a capitalist and an entrepreneur; he was, by no means, a spiritual or political radical and firebrand, like many fellow signers.

A side benefit to Henry Seymour's bucking of the demographic trends (so far) is that he is not an archival ghost.  Success in his business ventures meant that he would not have to live an itinerant lifestyle.  He remained permanently in Seneca Falls after migrating there in 1828.  His life is well-recorded in local histories.  He leaves behind a comparatively large, unambiguous documentary footprint.  He, therefore, had something to lose by lending his name to the Declaration.

I should here mention that Henry Seymour (Signer #75) should not be confused with his namesake, Henry William Seymour (#74), the spouse of Malvina Seymour (#17).  As portrayed in Donald Jacobus' 1939 genealogy, History of the Seymour Family, the two Henry Seymours were distant cousins (311, 376).  And the similarities between them are endlessly confusing.  The Seneca County Courier-Journal, in its July 1923, diamond-anniversary reproduction of the Declaration signers roll, for example, excludes Signer #75, evidently thinking that the two adjacent "Henry Seymours" constituted a typo or a misprint.  They do not.

The same confusion must have also manifested itself in day-to-day life around Seneca Falls, at least before Henry W. and Malvina Seymour transitioned to Lockport, Niagara County in 1864 (Jacobus 311).  The two Henry Seymours had identical professions, they were neighbors in the northeast quadrant of town, and they even shared a business partner.  Henry Seymour had sons named Henry and Willis.  Henry W. Seymour had sons named William Henry and Walstein.  To disambiguate the two men, local histories are careful to distinguish them in the same manner as the Declaration: as “Henry W. Seymour” and “Henry Seymour.”  To make matters worse, I could find no record of Henry Seymour’s middle name, which could help to further separate the two. Ordinally, the signatures of the two Henry Seymours are noteworthy because they immediately follow Signer #73, Frederick Douglass.  If there was to be any racist stigma attached to having one’s name close to Douglass’ in the Men’s Section, both Henry Seymours ignored it.

"During his childhood, until he was twenty years old, his home was in Skaneateles, Onondaga county, spending a brief period on a farm at Fairfield, O. [Ohio], and later as a civil engineer in Virginia.  Then he for a time occupied the position of turnkey at Auburn prison, and in 1828 located at Seneca Falls, first engaging in the foundry business, his partners being successively George H. McClary, Hiram Cornell and his brother, Elisha Seymour." (82-3)

Seymour’s earliest recorded business enterprise in Seneca Falls occurred some time after 1830 when he partnered with George McClary in the production of plows and threshing machines, “until the business was swept away by the flood of June, 1836” (54).  On May 7, 1834, he married Susan Cornell, a native of New Paltz, New York (Jacobus 376).  Like Signer #83, Robert Smalldridge, Henry Seymour's name appears on the Declaration while his spouse's signature, curiously, remains absent.

In an 1850 census record taken by Isaac Fuller, Henry and Susan, now 47 and 40, respectively, live in Seneca Falls with Ophelia, 11; Maria, 8; Henry, 7; and Susan, 5.  Henry’s profession is listed as pump manufacturer.  Hiram Cornell, 34, a pump manufacturer and possible relative of Susan's, also resides in the home.  The family’s wealth is assessed at $3,000.  The same page of the 1850 census also includes the household of Eunice Newton Foote, Signer #5, and Elisha Foote, Signer #72.  Polly Tewksbury, an individual inferred to be a daughter of Betsey Tewksbury, Signer #47, is listed immediately before the Footes, residing in the household of Crandall Kenyon, a hatter.  Later, the 1862 Brigham’s Directory lists Henry and Susan’s residence at “19 Cayuga,” a few blocks northeast of the Wesleyan Chapel (65).

After parting ways with Henry Seymour, John Cowing would actually take up business with Henry William Seymour in 1847, still manufacturing pumps and employing “five or six men” (Brigham 27).  Cowing transitioned from a partnership with Henry Seymour into another partnership with Henry William Seymour inside the span of one year, while remaining within the same industry.  The clear conflict of interest this must have presented to parties involved is hard to ignore.  The proximity of signatures between the two Henry Seymours in the Declaration is enigmatic in the way it might speak to their relationship during this period.  Is the closeness of their names evidence of competitive hostility, indifference, or rapport?  In either case, 1848 could very well have been a stress-ridden, galling year for Henry Seymour after his old partner had joined up with his relative and namesake.

With his brother Elisha in 1851, Henry Seymour began manufacturing “trusses and supporters” until 1856.  He also became a shareholder in a wheelbarrow company from 1858 to 1859, and he invested in an operation that manufactured tubs and pails from 1863 to 1864 (Welch 82).  In 1860, he partnered with H.C. Blodgett to open a grocery store in town—certainly a less hazardous occupation than metal forming and joining.  The 1862 Brigham’s Directory lists “Blodgett & Co.,” in the business of “dry goods and groceries” at “59 Fall” (37).

By the 1860 Seneca Falls census, Henry’s occupation is now listed as "Merchant."  The family has added another child, Willis, now 8.  Their wealth in property is valued at a considerable $20,900, personal property, $15,000.  Henry B. Seymour, 17, has taken up work as a dry goods clerk, likely working at the family store.

Son Henry B. Seymour would serve as a clerk in the 19th New York infantry during the Civil War (“Henry B. Seymour”).  He would pass away on June 6, 1869, age 26.  Mortality records in the 1870 census list the cause of his death as heart disease

His son's untimely death did not keep Henry Seymour from initiating yet another new business venture.  In July 1870, he founded The National Yeast Company, serving as its inaugural president.  1895’s Portrait and Biographical Record of Seneca and Schuyler Counties gives an account of the inspiration behind Seymour's secret recipe for yeast cakes: “Having been connected with a distillery in early life, and gaining a knowledge of fermentation, Mr. Seymour experimented considerably in manufacturing yeast cakes before opening his factory, discovering a formula which secured marvelous results in the leavening properties of the yeast cake, and the length of time this element was retained in the product” (154).  Evidently Signer #75 was not active in the Temperance Movement. 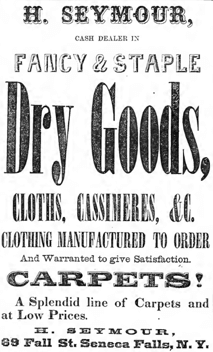 The extent to which the National Yeast Company endeavor would grow is evident in the 1887 National Yeast Company Cook Book.  Its cover boasts that daily output at the Seneca Falls plant amounts to “12 Tons” of product, with distribution centers as far away as “New York, Boston, Troy, Detroit, Chicago & St Louis.”  The 1876 History of Seneca County describes the yeast-cake production process at length, which involves a “hop-vat,” “mash-tub” “rolling room,” and “fermenting tubs” (110).  It claims that, as early as 1871, monthly production already constituted “five thousand boxes, containing over one hundred and fifty thousand packages of a dozen cakes each” (110).  The National Yeast Company Building at 201 Fall Street still stands and has been earmarked for renovation in recent years (Shaw "National Yeast").

Henry Seymour would keep the National Yeast Company in the family.  According to the Portrait and Biographical Record, daughter Ophelia Seymour would marry Harrison Chamberlain in 1868 (155).  Harrison Chamberlain was the son of Jacob P. Chamberlain, Stanton’s neighbor and Signer #88.  In 1878, Seymour's son-in-law would assume control of National Yeast, in addition to multitasking as “Director of the Exchange National Bank, owner of the Seneca Falls Woolen Mills…also of two flourishing mills, besides other valuable property, including two farms in the town of Seneca Falls, and one in Fayette” (154).  Ophelia and Harrison would have four children: John, Willis, Mary and Alice.  Leaving Seneca Falls after the 1910 census, Harrison and Ophelia reside with daughter Mary in Rochester by the time of the 1920 census.  Ophelia, age 90, appears in the 1930 census, residing with daughter Alice in Greenburgh, Westchester County, New York.  She would pass away on October 28 of that year (“Ophelia Chamberlain”).

On November 11, 1866, Henry Seymour's daughter Susan would marry Joseph H. Knight (Jackson & Jackson 11).  By 1870, Susan and Joseph surface in Troy, Rensselaer County, where Joseph is employed as a bookkeeper—a location confirmed by the ‘Grips’ Souvenir (83).  By the 1920 federal census, Susan and Joseph, now both 75, live in Troy with their two children, Henry, a clerk, and Mary, a teacher.  By the 1925 state census, the couple has reached the age of 80 together and have been married for nearly 60 years.  Susan would pass away on December 29, 1927 (“Susan Knight”).

Willis Seymour would wed Mary Avery on October 30, 1890, in Fayette ("Willis Seymour").  Child's 1894 Reference Business Directory of Seneca County locates the couple at 10 State Street, one block away from the Wesleyan Chapel (358).  In the censuses of 1880, 1890, and 1905, Willis’ occupation is listed as “Yeast Maker” or as “Man. Of Yeast Cakes,” suggesting that he was employed at National Yeast.  Willis and Mary had a daughter,  Susan, named after her grandmother.  An aficionado of music, a remembrance of Willis by Belle Palmer credits him with keeping the Seneca Falls "Cornet Band" afloat, a contemporary term for a wind instrument band.  Willis went through the trouble of furnishing the band with "rooms, light and fuel, a janitor, music instruments: in fact every expense was met by him, besides the erection of a band stand in the park.  He engaged musicians from localities: secured employment for them and paid salaries” (47).  According to the New York State Death Index, Willis would pass away on September 20, 1905, age 52.  The same year, 'Grips' published this photo of Susan, identified as #26, a member of the Trinity Episcopal Church Choir. 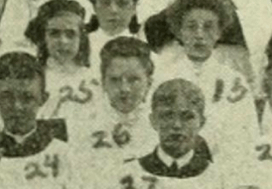 The 1894 Business Directory places daughter Maria Vandevere Seymour  at 29 Cayuga Street, at “the homestead of her father, the late Henry Seymour, who came here about 50 years ago, and was engaged first in the pump business, afterwards as merchant and later in the National Yeast Co.” (358).  In the 1900 census, Maria lives only with a servant from Ireland named Mary Gilmore.  Maria’s occupation is listed as “No Business.”  She is listed in the 1904 membership directory of the Daughters of the American Revolution at the Cayuga Street address (577).  Never marrying, Maria V. Seymour died on September 22, 1913 (“Maria Seymour”).

Henry Seymour, Signer #75, died on August 3, 1878.  The August 7 edition of The Geneva Courier remarks that this “leading business man and capitalist...was found dead in his bed Sunday Morning.”  The 1880 census situates the now-widowed Susan living with Maria and Willis in Seneca Falls.  Susan would pass away on September 11, 1890 (Jacobus 376). The Seymours are interred on a family plot in Restvale Cemetery. 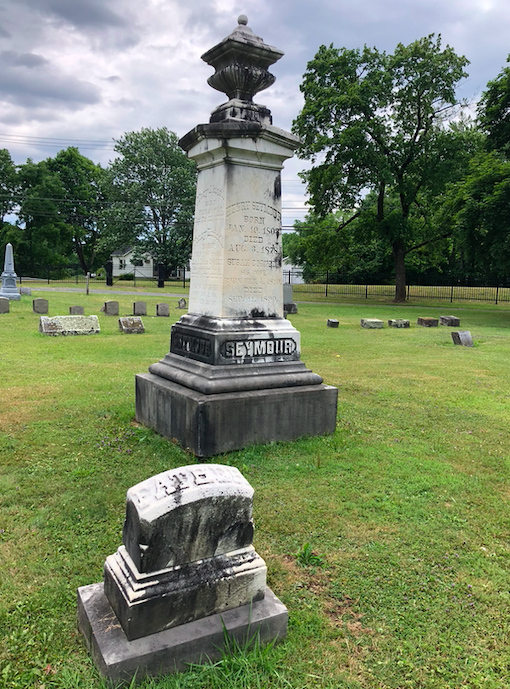 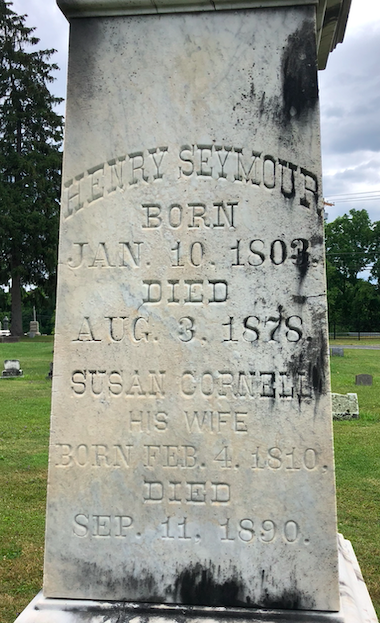 Decades after his death, Henry Seymour was still a well-remembered town father.  The ‘Grips’ Historical Souvenir relates that “he was a member of the Baptist church and always exemplified a Christian spirit” (83).  In 'Grips,' Henry Seymour’s photograph and profile come directly after the entry for “Woman Suffrage,” which gives comparably short shrift to the likes of Amelia Bloomer, Elizabeth Cady Stanton, Susan B. Anthony, and Frederick Douglass (81).  In Seymour's death three decades earlier, 'Grips' laments that “our village lost one of its oldest and most active citizens” (82).  Henry Seymour is also fondly recalled in a paper presented before the Seneca Falls Historical Society, early in the second decade of the 20th century, as “substantial, reserved, and kindly disposed” (Monroe 35).

A well-heeled local patrician, Henry Seymour was not a marginalized, vulnerable person in 1848.  Consequently, he took a risk by signing his name to the Declaration; he increased that risk by inscribing it two spaces removed from that of Frederick Douglass.  He doesn't fit neatly in among the other signers of the Declaration, and that is something worth appreciating.

“Henry B. Seymour.” Records of the Office of the Quartermaster General. Ancestry.com. Accessed 1 Feb. 2020.