Many of the Declaration signers profiled (so far) were recent parents by 1848. Sadly, their then-newborn children were destined to be part of a supremely unlucky generation. Males born in the first first half of the 1840s would grow up to be the teenagers who fought and died in the American Civil War.

Remarkably, Isaac Van Tassel also volunteered and saw combat. Then in his late 40s, he enlisted in the 33rd New York Infantry as a musician in 1861. The list of battles that he would have witnessed and survived in this capacity is truly harrowing.

According to his death certificate, Isaac Van Tassel was born in Clyde, Wayne County, on June 29, 1812, the son of Rachel Pierce and Abraham Van Tassel. With the preponderance of Dutch surnames in New York State--one is reminded of Ichabod Crane's love interest Katrina Van Tassel from Washington Irving's "The Legend of Sleepy Hollow"--tracking Isaac's life before the Convention has proven to be difficult. I was able to uncover some description about this period in an 1890 biographical portrait of his son William. Young Isaac "grew up under the influences of a modest home where industry and economy were the ruling principles. He obtained a common-school education, and at an early age began an apprenticeship at the cooper's trade" (Portrait 161).

According to a family tree constructed on Ancestry.com, Isaac married Naomi Stimson in Waterloo around the year 1839. The couple then settled in Seneca Falls some time prior to 1842, when Isaac became a firefighter in the village.

A 1904 article in The Seneca Country Courier-Journal lists Isaac as a member of “Rescue Engine Co. No. 3,” formed in July 1842, to “aid more effectually in carrying into operation an act establishing a fire department in the village of Seneca Falls." The unit also counted D.C. Bloomer, the spouse of Amelia Bloomer, among its ranks. As one of the capitals of pump-making in the United States, firefighting and fire engines were a local obsession in Seneca Falls.

During this period, Isaac was also a Methodist and congregant of the Wesleyan Chapel, and he was affiliated politically with the Free Soil Party (Wellman 206, 208). The Van Tassels appear in an 1850 census record taken by Isaac Fuller.

Naomi's and Isaac's household is listed next to that of Isaac's elder brother Abram. Isaac is 37, Naomi is 27, and they live with four children under the age of 7: William Henry, Mary Ann, George, and Martha. Isaac is the second cooper among the signers of the Declaration--a feature shared with Robert Smalldridge. He is also the fourth signer profiled so far whose spouse, for whatever reason, did not lend her signature to the Declaration of Sentiments.

According to her epitaph, Naomi Van Tassel died in 1853 and is buried in Restvale Cemetery. Her loss might be connected to the delivery and short life of a boy, Clarence, born in 1852. Daughter Martha also vanishes from record during the 1850s.

Isaac, now a single parent of 46, is recorded in the 1860 census for Seneca Falls with his adolescent children, Mary, William, and George.

William, listed as a cooper, has taken up his father's profession for the moment.

Oddly, Isaac Van Tassel does not appear in either the 1862 or 1867 directories for Seneca County. His neighbor and brother, Abram, is included in both. In the latter, Abram is listed as a "well-digger, building mover and farmer" who lives at 24 Troy Street in the village's Second Ward (207). The Ward and Palmer families, who are recorded immediately before Isaac Van Tassel's household in the 1860 census, live on Chapel and Clinton Streets, respectively. These addresses suggest that Isaac resided in the northeastern quadrant of the village, north of the river (71, 59).

A paper read before the Seneca Falls Historical Society around 1911 remembers Isaac's brother Abram, somewhat comically, in a nostalgic account of the village's notable characters. On the street, one might well encounter "Abram VanTassel, wearing only one suspender,” although exactly what quality Abram's single suspender signifies is hard to tell (34). By the time of the 1870 census, Abram and his spouse, Julian, had done well for themselves, amassing an estimated $4,300 in wealth.

In 1861, Isaac's last surviving daughter, Mary Ann, passed away, according to an Ancestry family tree. Perhaps the losses of the previous decade provide some context for the momentous decision Isaac Van Tassel made at the outset of the Civil War. The 1876 History of Seneca County lists one Isaac Vantassell as a private in the 33rd New York Infantry, Company A, also known as the "Ontario Regiment" (115).

Documentation supporting this appears in a muster roll card, stating that Isaac, 44, signed on as a musician in May 1861 at Seneca Falls. I was unable to locate exactly what type of instrument he was charged with playing. 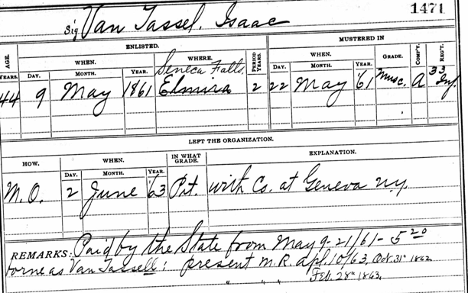 In the 1860 census, Isaac's age was set, more or less correctly, as 46. One year later, his age at enlistment has been retrograded to 44 years old. In the passage of one year, Isaac had mysteriously grown 3 years younger.

There is an explanation for this discrepancy. It seems that Isaac's advanced age might have prohibited him from serving in the military. In a period when exact birthdates were often fuzzy and rarely counted officially, Isaac Van Tassel might have misrepresented this bit of data in order to meet the Army's age requirement. If he was, in fact, born in 1812, he would have been just two months shy of turning 49 when he enlisted on May 9, 1861.

A summary of Isaac's war record is supplied by the 1900 edition of The Annual Report of the Adjutant-General of the State of New York (139).

According to histories of the 33rd Infantry's engagements provided by the New York Military Museum and the National Park Service, the unit was sent from western New York to Washington, D.C. There, it took part in skirmishes along the Potomac River. In March 1862, the regiment was transported by boat to eastern Virginia for the Peninsula Campaign. In April and May, the 33rd fought at the Siege of Yorktown and the Battle of Williamsburg. During May, June, and July, 1862, the 33rd fought at Mechanicsville, Gaines Mill (during the Seven Days Battle), White Oak Swamp, and Malvern Hill. That June, Isaac Van Tassel turned 50.

The 33rd was posted to Maryland by the autumn and saw combat at South Mountain and Antietam in September 1862. By December, it was involved in the Battle of Fredericksburg and, in April and May, 1863, Chancellorsville. The History of Seneca County lists Isaac Van Tassel alongside a number of his comrades in the 33rd, who were wounded, slain, or taken prisoner at Antietam, Fredericksburg, or in the ill-fated Peninsula Campaign (115).

Isaac's son William also served, joining the 19th New York Infantry the same month that his father enlisted in the 33rd. William was, shortly thereafter, transferred to the 3rd New York Artillery. A short biography in The Portrait and Biographical Album of Greene and Clark Counties, Ohio (1890) states that William, "determining to have a hand in the preservation of the Union," was deployed to "Newburne" (New Bern), North Carolina, and was present at Petersburg, Virginia, for the Battle of the Crater (161). "Although experiencing many privations and hardships, he escaped comparatively unharmed amid the vicissitudes of army life, and at the close of the war received an honorable discharge, and was mustered out at Fortress Monroe. Later he received his pay at Hampton Roads, Va., near the same place" (161).

The 1897 Annual Report of the Adjutant-General confirms many of these details about William's three years of service. It also accuses William of a desertion that took place in November 1861, months after his initial enlistment (535).

After the war, son William Van Tassel would become, by 1890, the superintendent of the Ohio Southern Railroad, headquartered in Springfield (Portrait 161). The Portrait and Biographical Album of Greene and Clark Counties, Ohio includes his profile: 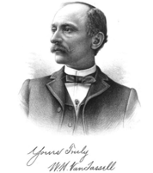 William would resign the superintendent position in 1892 and, afterwards, make a living as a telegraph operator and boarding house owner. William appears in the 1900 census for Springfield, Ohio, living with spouse, Jennie, and a son, Royal. He would pass away in 1908 (“William H. Van Tassel”).

Like many of the Declaration signers and their children, Isaac Van Tassel eventually went out West. In 1871, Isaac's son George is recorded purchasing 160 acres in Michigan to start a farm. The same year, George married Olive Pennington, a 16-year-old Michigan native. George, Olive, and Isaac appear in the 1880 census for Sheridan, Michigan.

Now 68 years old, Isaac has been restored in this census to his numerically correct age.

Isaac Van Tassel died on November 8, 1889 of "Paralysis." I found no evidence that he ever remarried after the death of his first wife.

His remains were transported back to Seneca Falls, and he is interred at Restvale Cemetery, next to Naomi's grave. Dying within a year of his brother, son George died on his farm in Sheridan, Michigan, in 1907. 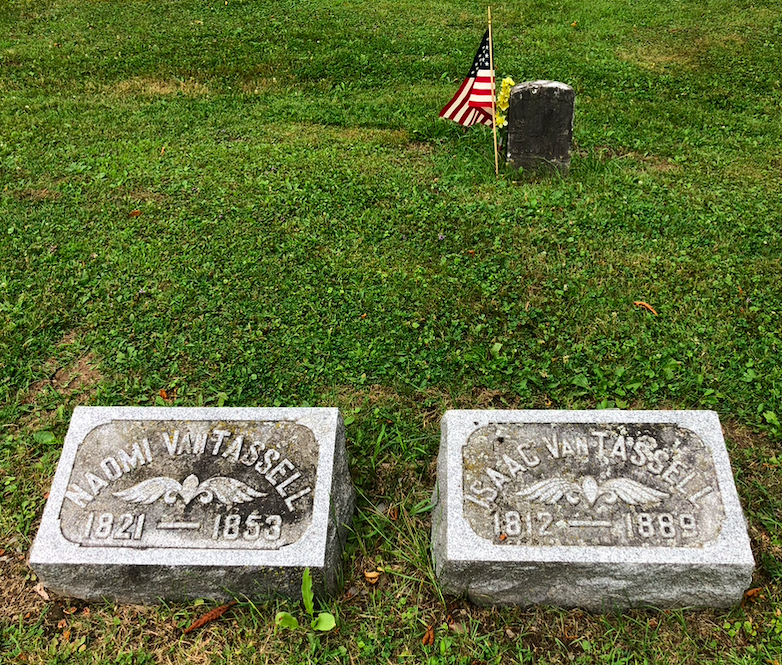 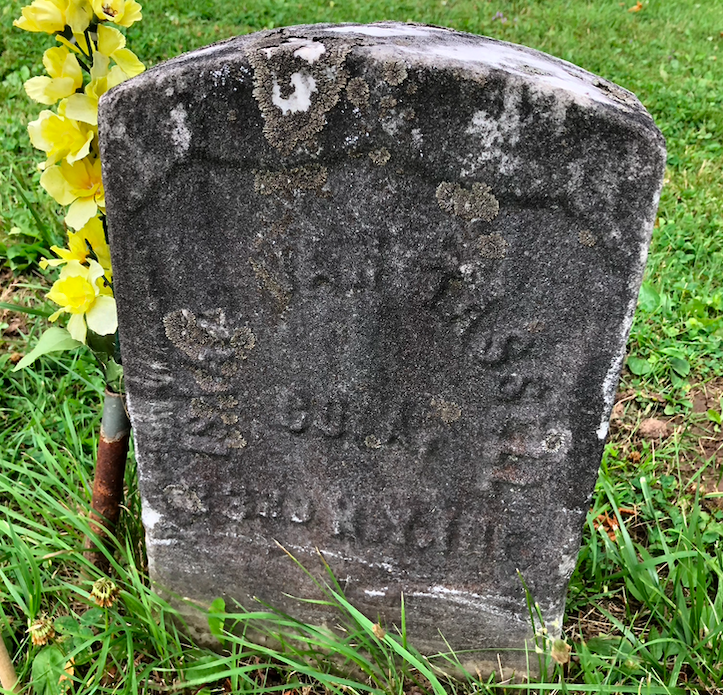 Beyond lending his signature to the Declaration of Sentiments, Isaac Van Tassel was obviously willing to fight for his Free Soil convictions and his opposition to slavery. It is painfully difficult to imagine how he functioned as a musician amidst the carnage of places like Mechanicsville and Antietam. Signer #95, in his late 40s and early 50s, was likely compelled by the necessity of survival to take up arms and fight for what he believed in.